Today the sister and brother team of Natasha Rose and Procyon experienced their first day together in serious field and gun training. We spent the late morning working with both dogs.  Procy had a previous day's training with owner, Juan Carlos, but for Natasha the sound of the gun was a new experience for her. Working together Jorge would fire the shotgun in the air while Juan Carlos would toss a dummy fetch toy into the field. At first she flinched at the noise but once she realized she was expected to go find the training dummy she was quick on the scent.

Not only did the dogs learn so did we. We learned that just like preparing the baby bag for little 14 month old Peter who was enjoying a day 4-wheel walking, we needed to have just as much equipment. And next time we'll make sure we'll bring it all!

We all came home hot and tired. Poor Natasha however, had the brunt of it all. After a day in the sun and running pell-mell in the open fields the long ride back home took its toll as she suffered car sickness upon our arrival. Bless her heart though, she was able to keep from being sick until we opened up the back gate of the car.

Tonight she is cuddled up and recuperating from her day of fun and guns in the sun. The only problem is she fell asleep on Samson's bed and now he's a bit perplexed. 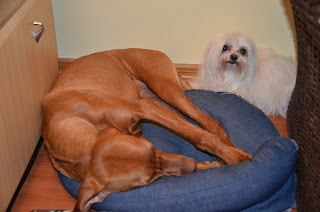